After a long and hard-fought FHC career, Korbin Thompson hangs his hat up as one of the best bowlers to pass through the program. In his final season as a Ranger, Thompson earned himself a trip to the MHSAA State Tournament, where he would show out to end his career. Thompson had a very long and successful bowling career at FHC, but he shined his brightest during his senior season. After signing with Missouri State University, diver Cole Hysong upped his game to the max. To end off his career at FHC, Hysong would come into states as the sixth-ranked diver and finished in the finals at a spectacular third place. Hysong has lived up to the hype after four outstanding seasons at FHC; he has truly proven to be a Division I diver.

“It means a lot because it really shows my progression throughout my four years of diving for FHC,” Hysong said. “Freshman year I got 19th, sophomore year I was ranked eighth, junior year I got seventh, and this year I got third. It was super cool to be near the top of the podium with the other super good divers. It also shows my hard work and dedication to the sport.” 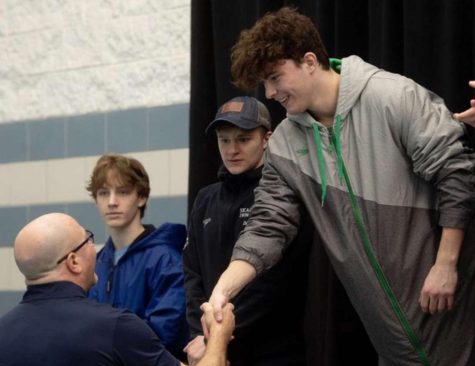 Davenport signee Angelina Keeler wowed the crowds all around the state of Michigan this winter after dazzling her way to the top ranks of the FHC cheer team; Keeler helped lead the team as the Flyer during its routines. Angelina led her and her teammates all season during their brilliant performances, as proven by her scholarship to Davenport. After destroying the slopes all season long, it is no surprise at all that Ben Taylor made this list of immaculate seniors. Taylor proved he truly knew how to captain a squad, as he placed 47th overall at states in the men’s giant slalom and 54th in the men’s slalom race. Ben also earned the 28th spot after a killer performance during the giant slalom while battling an injury, which is a great example of the mental toughness Taylor showcased throughout his FHC career.

“It’s a big honor and means a lot because I’ve put in a lot of work all four years and I’m glad it all paid off this year,” Taylor said. Hockey captain Lucas Jeffreys earned this spot after having a dominant senior season at FHC. He helped lead the team to the regional semi-finals, which ended in a devastating loss to Mattawan in triple OT by a score of 2-1. Jeffreys finished with 29 points on the year, including 14 goals and a team-high 15 assists. Jeffreys will be heading over the border next season to play in the junior leagues up in Saskatoon next year.

“It feels good to go out this way,” Jeffreys said. “Not only am I representing myself as a player, but I also got to represent my team, which I felt honored to do for my four years with this team. I can’t wait to see where this program heads and the next chapter to my career in Canada.”